About the Japanese Gardens

Please Note: All historical pages on this website are considered works in progress. Writing will be adjusted as more information becomes available. If you have a source that could improve or correct our information, please reach out to us.

Spanning 14 acres, the Japanese Gardens at Swiss Pines were a unique work of art. Combining multiple different garden types intermixed with the unique vision of Arnold Bartschi, there was nothing quite like strolling these winding paths.

Are These Gardens Truly Japanese?

Throughout its storied history, the Gardens at Swiss Pines have often been referred to as “Japanese inspired” as opposed to strictly Japanese.

Japanese gardening stems from hundreds of years of intense cultural development. The rules are simultaneously strict and flexible, depending on the knowledge of the head gardener, but certain principles exist to guide the development of the garden in order to evoke certain emotions and experiences. To view one with a trained eye takes years; to create one with a trained eye takes a lifetime.

Arnold Bartschi was a man that simultaneously admired those traditions while sidestepping them at will. Bartschi went to great lengths to receive guidance from famed Japanese gardener Katsuo Saito and Hiroshi Makita, but he integrated his own thoughts and aesthetic tastes as he saw fit. 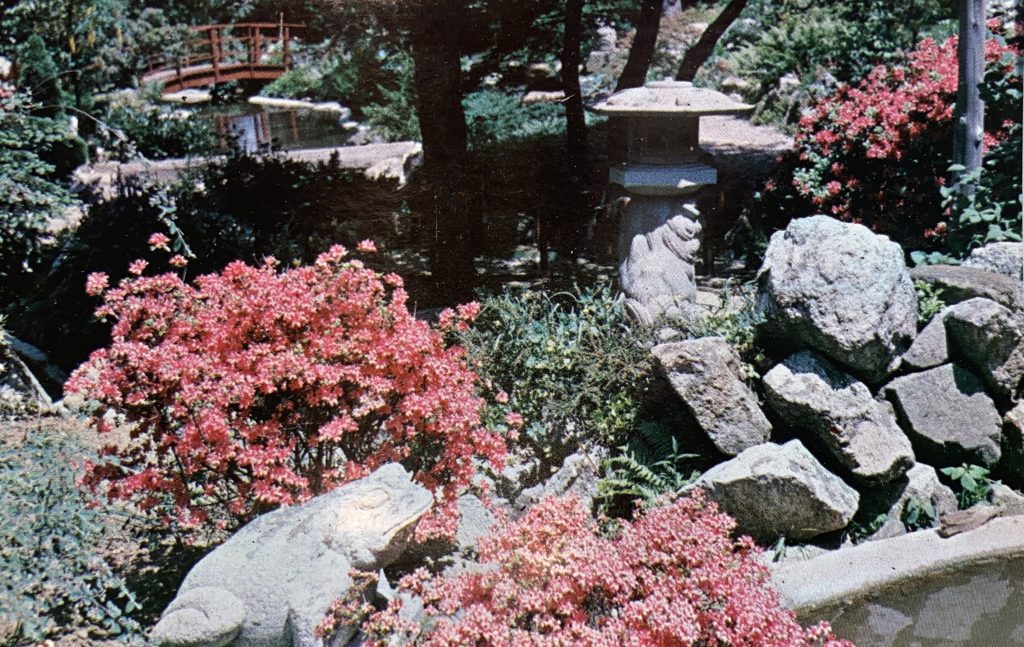 As such, the most accurate term for the Swiss Pines Gardens is wayō-setchū (和洋折衷, 和洋折中 “Japanese-Western bent feelings”) – a melding of Eastern and Western concepts.

These gardens are a collection of influences throughout Japanese history, each with its own in-depth story to tell. To gain a better sense of Swiss Pines as a whole we should examine each of its components in greater detail.

When imagining a Japanese garden most people conjure images of small landscapes set in front of a tea house, or raked lines of sand in a zen-like setting. In truth, there are many different types of Japanese gardens harking back to different eras of Japanese history and crafted to achieve different results.

The Gardens at Swiss Pines were built in multiple phases, containing elements of different styles. However, the most accurate way to describe the grounds as a whole would be Chisen Kaiyu-Shiki Teien. 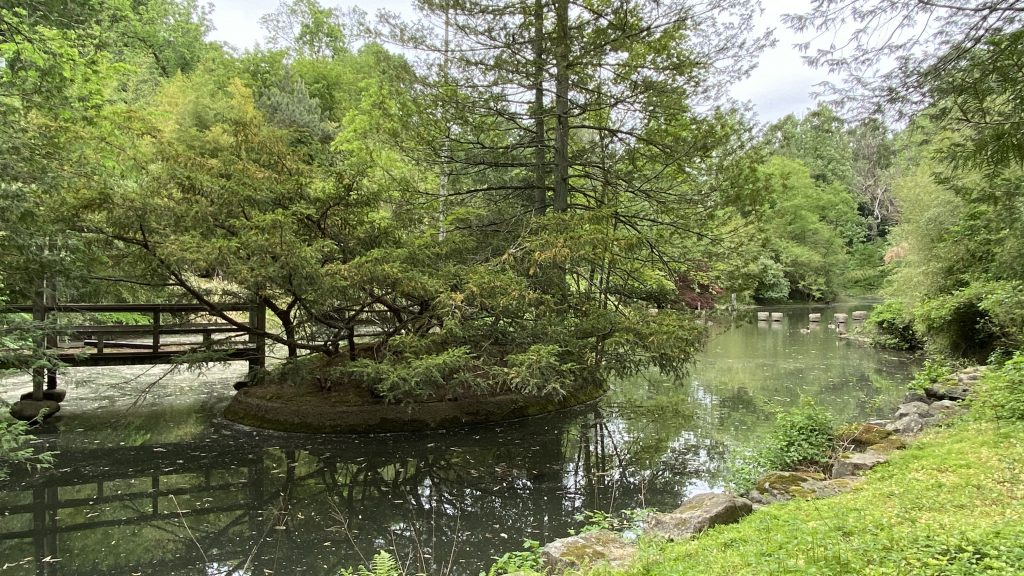 Let’s first break down what this term really means:

This garden style was popularized in the Late Edo Period (1600–1854) and became a hallmark of Japanese noble estates.

The Gardens at Swiss Pines contain paths centered around a spring-fed pond, but extend out over 14 acres. The thick forestry of Pennsylvania lends itself to miegakure, “hide and reveal”, which strategically obscures areas of the garden so that the viewer can take in each section independently. Glimpses of future sections, and curiosity of the unknown, pulls the viewer forward and delights them as each section provides a new viewing experience.

In 1981 Architectural Digest featured Swiss Pines in an article and wrote this about their experience visiting the grounds:

“After winding across hillsides thickly planted with trees and bamboo, the path leads into an open area and skirts the margin of a peaceful lake. A verdant island in the middle is reached by way of a wisteria-covered bridge or a flat-bottomed boat.”

“The sight and sound of water is a vital feature of Swiss Pines. At the base of a steep slope, an arching stream of water makes a graceful descent from a bamboo pipe into a frog pond bordered by azaleas. Massive stone lanterns provide decorative highlights at the edge of the path or serve as the focal point in a clearing. Contrasts of texture and hue abound. The dark trunks and brittle branches of ornamental cherries etch the sky as in a Japanese scroll painting. Cushioning soft moss covers the ground.”

“Tall hemlock trees, bamboo, azaleas, ferns, and pachysandra ensure the privacy of a goldfish pond at Swiss Pines. The humpback footbridge spans a rocky stream that feeds the small pond.”

Additional Styles Utilize by the Gardens

At peak operation the Gardens contained a variety of other influences. English gardens and herb gardens adorned the outskirts of the Llewellyn Mansion while a Polynesian garden blended in with more traditional Japanese fare. But even amongst the Japanese areas, Bartschi and his designers created multiple experiences. Some were as follows:

A term meaning “concentrated views”, Swiss Pines once contained miniature landscapes. Shukkei often contain all the elements you’d expect to see in a Japanese garden (stone, tree, moss, etc.) but in a smaller format designed to replicate a larger landscape. Shukkei are usually enjoyed from a viewing point inside of a home or tea house.

A 1970 article stated this about the shukkei of Swiss Pines:

“The area contains a shukkei garden of miniature landscapes, a quiet, meditative monastic garden, sprays of Tieris Japonica and an authentic pavilion from the sacred city of Nara, containing an original copy of a Japanese tea house patterned after one near Tokyo.” – The Mercury 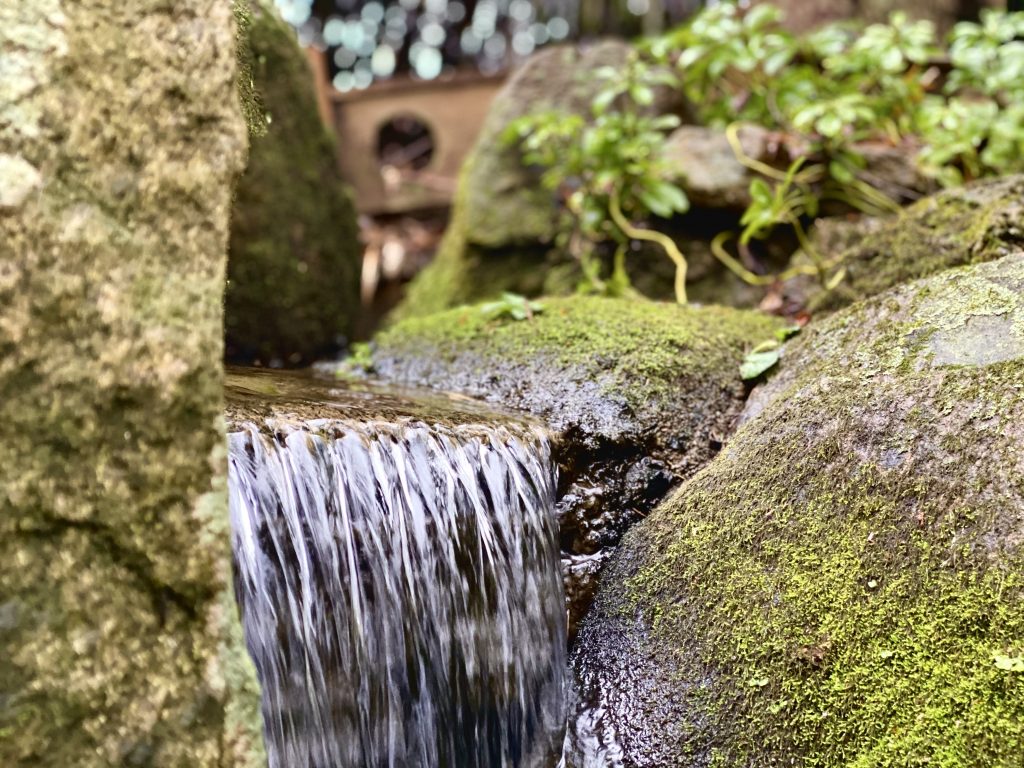 The karesansui that used to exist at Swiss Pines.

Raked stone gardens, often associated with the Zen philosophy. Karesansui are designed to be focal points of contemplation. Their minimalist designs allow room for the mind to wander and fill in the gaps. Rock placement can often take the form of classic patterns, such as “Mystic Isles”, and the raked sand or gravel can invoke a sense of movement or water.

In 1987 an article had this to say about Arnold Bartschi’s karesansui:

“While Bartschi takes pride in his garden’s authenticity, he has strong personal tastes and has made a few modifications to satisfy his aesthetic preferences. ‘This stone garden is supposed to be completely made of rocks’, Bartschi said as he pointed toward two small boulders imbedded in a carpet of white pebbles. Between the rocks, however, spread a carpet of green shrubbery. ‘I’m not supposed to have any green stuff in here but it makes it much more attractive.’” – The Philadelphia Inquirer

Japanese culture has a way of distilling common practices into their most basic form, appreciating every moment and every movement. One of the quintessential examples of this is chado, the tea ceremony.

Sipping tea may seem like a rather mundane practice, but in chado every action is significant and nothing is wasteful. To observe a tea ceremony is to be brought deeply into the moment, allowing extraneous thoughts to be pushed aside. The perfection of this minimalist art requires an equally minimalist space, hence the creation of the cha niwa, tea house garden.

Tea ceremony came to prominence in 15th century Japan, with tea houses following in the 16th century. The design of the houses is often clean and simple, with just enough functionality to aid in the ceremony and provide a comfortable space. Viewing gardens are used in coordination with the tea house, employing shukkei miniature landscapes, karesansui dry gardens, or other intentional viewing experiences.

Arnold Bartschi considered the tea house very important to his overall plans. Amongst the small structures dotting his garden landscape, two formal tea houses were created. A 1985 article described the initial process of bringing the materials directly from Japan:

“A teahouse was imported from Japan but on its arrival Bartschi and his staff were unable to assemble the structure. ‘They didn’t send us any nails’, he recalled, ‘so we had to bring an expert from Japan to put it up for us – without nails. The teahouse was designed by Katsuo Saito, a famous landscape architect in Japan, and is a reproduction of an ancient chosho-tei,’ a one story tea house.” – The Philadelphia Inquirer.

A second teahouse is placed close to a small shrine in the garden known as a shinza. The shinza represents the heart of the garden, where a protective spirit is invited to reside. The proximity of the teahouse allows for annual ceremonies that are both beautiful and meaningful to the older philosophies of Japan. One of two primary teahouses at Swiss Pines. This particular teahouse is beyond repair. 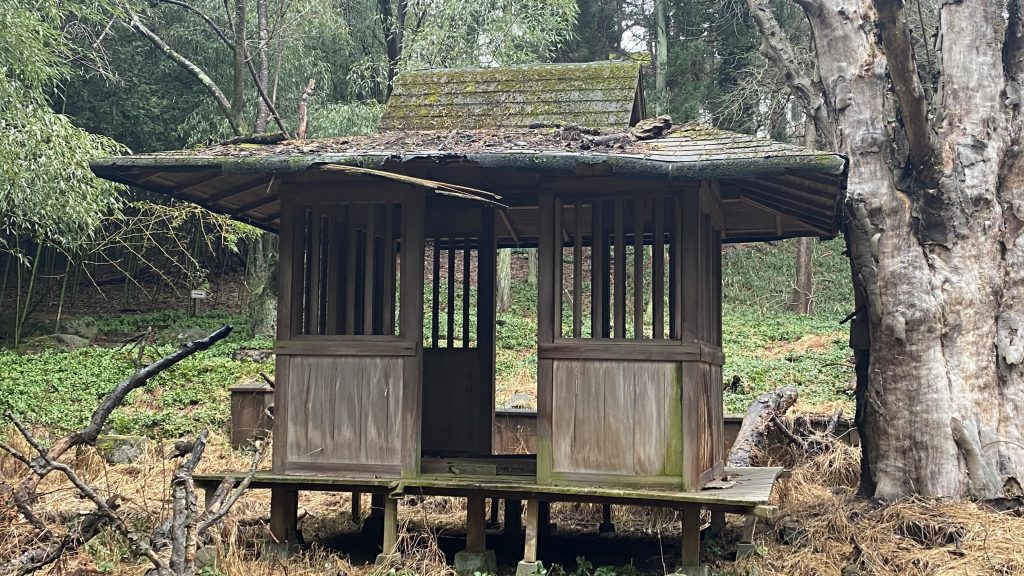 Second teahouse that is repairable and still standing. 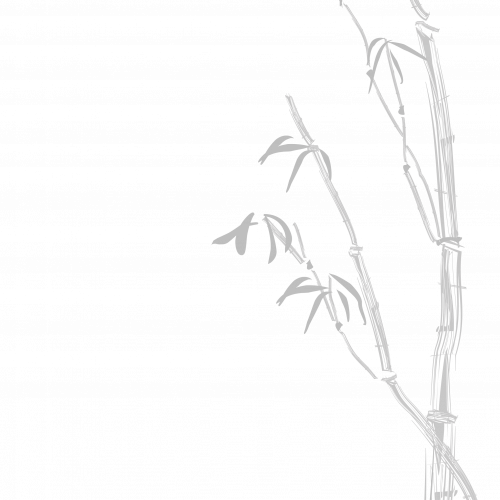 Moss is often a crucial part of Japanese gardens as it creates a sense of peace, continuity, and consistency. It also seems to mute noise and allow for mental focus. Moss is not often featured in Pennsylvania gardens but Arnold Bartschi was set on making it happen. According to him:

“‘I wanted to grow moss and people said it couldn’t be done. I wrote to 12 universities. I wrote to the state and federal government and all said it wouldn’t work for some reason. When people say no that gives me a challenge to do it.’ So he placed assorted rocks in the mid-stream and watched the moss grow on the rocks and along the banks.” – The Philadelphia Inquirer

The moss is currently gone at Swiss Pines but the stones placed by Bartschi are still there. Perhaps with careful grooming the moss can return.

While the Japanese gardens are considered the “main event”, Bartschi and a team of local experts also created other interesting areas on the property. They include:

Some of these elements have survived to this day, while others are restorable. Some are lost to time. 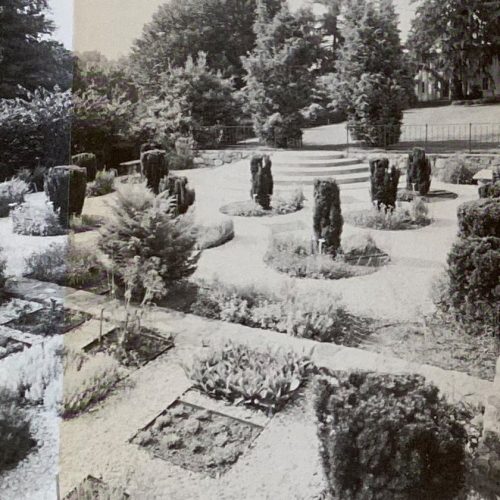