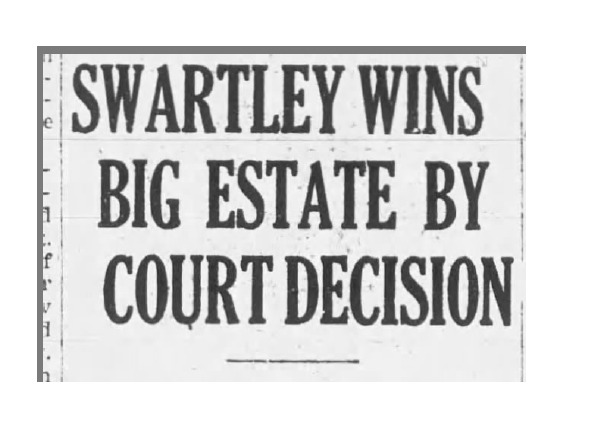 In 1926 William passed away and bequeathed his sizable fortune to Henry G. Swartley, a protégé and confidant. Swartley began as an assistant to Llewellyn in the pharmaceutical field but eventually proved capable enough to manage stores and act as travelling companion to William. The property and cash assets were valued at just under $1 million (which in 1926 was no small allowance).

Disputes over the property and fortune arose immediately. Llewellyn’s cousins were determined to fight Swartley for control. However, evidence that Llewellyn had no significant contact or affection for his cousins swung the courts in favor of Swartley, and by 1928 the legal matter was closed naming Swartley as the sole inheritor.

According to the Daily Local News in 1928:

Regarding Llewellyn and Swartley – “‘Both were druggists,’ said Judge Stearne in his opinion. “There was a close intimate and harmonious relationship existing between them for an unbroken period of approximately 37 years. The situation was an unusual one, but under the facts a natural one. The mutual attachment, as it ripened during the years, was orderly and progressive.”

“The property at Charlestown is one of the show places of this region. Mr. Llewellyn, born and raised in this vicinity and at one time employed as a clerk in a Main street store, achieved wonderful success in Philadelphia, being rated as a millionaire. Some years ago he returned to the community in which he was raised and erected the wonderful home at Charlestown and surrounded this home with one of the finest gardens to be found anywhere in the east. The “Llewellyn Gardens,” as they are known, are visited annually by thousands of people and are open every week-day, except Sunday. Mr. Swartley and his family have been residing at Charlestown ever since Mr. Llewellyn’s death.”